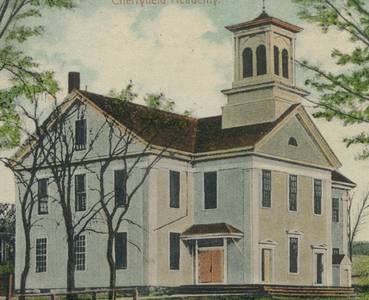 Cherryfield Academy was incorporated 176 years ago by an Act of the Maine Legislature on February 19, 1829, “…for the education of youth, and the promotion of piety and morality….” The original Board of Trustees reads like a Who’s Who of Cherryfield – Samuel Merrill, Phineas Bond, John Upton, Philo Lewis, James A Campbell, Tobias Hall, Joseph Adams, William Nichels, Alexander Campbell, Alexander Nickels, Jeremiah O. Nickels, James Small and Charles Hall. Many generations of these distinguished families were educated at the Academy and some descendents still reside in the town.

In 1886, Judge James Milliken became Cherryfield’s first historian by writing a small volume, The Narraguagus Valley – History of the Early Settlers. The Judge’s son, Dr. Charles J. Milliken, served as treasurer of the Academy in 1895-6. The Doctor’s son, James C. Milliken, founded the Milliken Insurance Company (later bought by Hollis Fickett from James Milliken’s widow, Charlotte). In 1948, James C. Milliken wrote a short narrative about the Academy, borrowing liberally from his grandfather’s little history book and family experiences. I, in turn, borrow liberally from James’ notes and from original documents supplied by Margery Brown of the Cherryfield-Narraguagus Historical Society. As usual when writing about matters historical, I siphoned some of this material directly from the mind of Margery Brown, Cherryfield’s living historical encyclopedia and current President of the Society.

In 1948, James C. Milliken wrote: “Until 1850, the school led a sort of itinerent [sic] life, being held first in one place and then in another. For the first ten years, the sessions were held in an old meetinghouse, which had been remodeled and repaired for the purpose. The site of the building was near the present location of the Baptist Church. In 1839 this structure was burned, and for ten years the school languished. A private school was taught for a time in Lyceum Hall.”

“In 1850, the Union School District was formed in order to provide the Academy with a suitable and permanent home. The present building was erected by the district and deeded to the Trustees. This generous act afforded the School excellent accommodations, and attracted the attention of those interested in higher education to Cherryfield. Competent teachers were employed, and the excellence of the instruction given drew many students, who are today among the active men and women of this and many other states.”

The “Catalogue of the Officers and Students of Cherryfield Academy for the year ending February, 1853” lists a Board of Trustees including some Campbells, Nickels, and Smalls plus a Willey, a Wakefield, a Burnham and a Nash among those at the helm. It lists two teachers, Francis A. Gates, A.M. and Miss Catharine R. Lord, and a total of 198 students – 99 “Gentlemen” and 99 “Ladies” – a student/teacher ratio that would surely be frowned upon today.

In addition to English, Latin, Greek, French and Spanish were taught. The Trustees take the opportunity to include some general remarks, to whit, “This Institution is located in the pleasant village of Cherryfield, on the Stage road leading from Bangor, Bucksport and Ellsworth to Calais, Eastport and the Provinces: and the Trustees, in issuing this, their first Catalogue, take pleasure in saying that, in its success, their most sanguine expectations have been fully realized. In the facilities it affords for acquiring an education, either for practical life, or for advancement to the higher Institutions of our country, they believe it to be equal to any of the kind in the State, and therefore recommend it as such, pledging themselves that nothing shall be wanting on their part to sustain the high reputation is has already gained.”

Getting back to James C. Milliken’s 1948 narrative we read, “In 1873, in order that the town might take advantage of the Free High School Act, the Academy building was leased to it for a nominal sum, and a school was carried on under the provisions of said act until 1895. Previous to that time it was recognized throughout the State that the interests of common school as well as higher education would be advanced by reorganizing the old academies. The Legislature of 1893 encouraged this movement by assisting many of them liberally. The Trustees of this Academy applied to the legislature of 1895 for aid, and having obtained it, opened the present school April 15, 1895.”

The Academy remained an educational and community center until 1967 when S.A.D. #37 was formed and Narraguagus High School was constructed, after which, the Trustees deeded the building to the Town of Cherryfield for use as a Town Office and community building. The town used it until 1999. During this period the town renovated a portion of the first floor lecture hall into offices, and two classrooms in the rear of the first floor were developed into the town’s library. Union Hall, the historic second story auditorium with its magnificent vaulted ceiling, stage and exquisite acoustics, was closed to conserve energy.

In 2000, after the completion of a new town office building and post office on Route 1, the Academy building as deeded back to the Board of Trustees. Since then it has housed the Cherryfield Free Public Library, some 1st floor rooms have been available for various group meetings, and the building has been maintained at a subsistence level. The effort to conserve energy, along with advancing age, caused degradation of the plastered walls and ceiling to the point of being dangerous and the auditorium was closed for safety reasons. This winter, the Cherryfield Library will be relocated to its new home in the old Union Trust building on Main Street.

The Board of Trustees, led by Chairperson Nancy Willey, have embarked on a plan to bring the Academy building back to life. With the help of Down East Resource Conservation & Development (RC&D) they secured two small grants. With these, they hired Chris Glass, a historical architect from Camden, to study the existing building and submit plans for getting the building up to code – which includes removing some walls, installing an elevator, improving bathrooms and installing a sprinkler system so the building is suitable for general public use – while preserving its historical character. The roof has been repaired and the chimneys inspected.

Last spring several local businesses donated money to clean up and paint Union Hall. To date, the ceiling and walls of Union Hall and the ceiling over the stairs have been restored and painted. The signature magnolia medallion in the ceiling has been restored to its original splendor and, if the Trustees have their way, it will some day once again have a chandelier hanging from its centerpiece.

Fundraisers and donations are on-going and if the success of the recent Harvest Festival is any indication, the Trustees have the full support and enthusiasm of the community. They plan to sponsor suppers, plays, a Miss Cherryfield pageant, and a full range of Cherryfield Celebration activities. The Trustees, all Academy graduates recognizing their advancing years and a dearth or possible replacements, have amended the by-laws allowing relatives of Academy graduates to serve as trustees, thereby insuring an influx of new ideas and energy.

“We realize this is a tremendous undertaking,” Nancy Willey told me, “but we wish to make Cherryfield Academy once again, the educational, social and cultural focus of our community.”