Margery Brown Honored by 2 Those Who Care 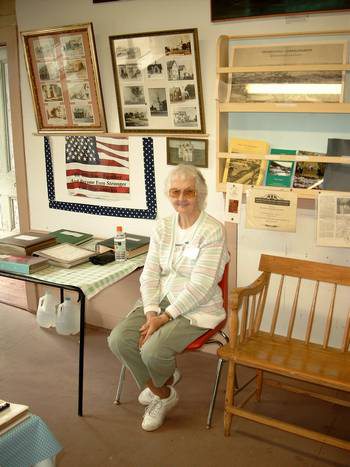 Margery Brown of Cherryfield is one of a group of outstanding volunteers from Eastern Maine who will be the honored guests of WLBZ 2 at the annual 2 Those Who Care Awards. The awards will be presented at a gala invitational ceremony on Wednesday, October 5, 2005 at the G. Peirce Webber Campus Center at Husson College in Bangor and will be televised as a primetime special on WLBZ 2 on October 18, 2005, 8:00pm.

Margery moved to Cherryfield with her late husband, Ted, in 1952 and began her life as a volunteer in 1953 by helping with the school lunch program where she “helped serve the food, cleaned up the mess afterwards and did whatever the cook asked you to do.” When her family was young she did a stint as a Sunday School teacher, but she is being recognized now primarily for her work during the past thirty-one years as one of the founding members of the Cherryfield-Narraguagus Historical Society (and 31-year President) and the Cherryfield Free Public Library, and for her more recent service as a member of the board of selectmen and a variety of related committees, the Washington County Council of Governments, the Sunrise Economic Council, the Washington County Commissioner’s Budget Advisory Committee, the Cherryfield Celebration Committee, and for numerous caring interventions on an individual level.

Unofficially labeled the “town historian”, it is rightly thought that Margery Brown knows more about the town of Cherryfield than anyone else in the world. She served as town clerk from her home for nine years (1963-1972) and on the planning board for ten years. In 1995 she secured a grant and put all the existing town records on microfilm. Through these activities she was introduced to what is now her primary interest, genealogy. She and her late husband cleaned and catalogued more than 40 historic cemeteries in the area and she personally fulfills the genealogical requests received by the Historical Society.

On one recent evening, Margery realized that she had two meetings in Cherryfield and one in Calais scheduled for 6:00pm. “I think I just over-extended myself,” she recalls saying. She sees her work as a way to serve the community, and conversely, as a way to fill her own life with meaningful activity. Although her schedule can be demanding and is the source of much family amusement, of the “Where’s Mom?” variety, she expresses no interest in slowing down. She is a two-time cancer survivor and has often lent support to other cancer patients by taking them on the 120-mile round trip to Bangor for treatment, as well as sharing her caring ear.

When we discussed this award one recent afternoon, it was very typical that she spent most of the time talking about the contributions of the other award winners she had recently met. She seemed most impressed with those who greet returning soldiers at the Bangor Airport. We agreed that it’s always nice to be recognized for one’s efforts, but I got the clear impression from Margery Brown that she does what she does for the love of it and rather wonders what all the fuss is about.

2 THOSE WHO CARE was developed by WLBZ 2 in partnership with the United Way of Eastern Maine to honor truly exceptional people – men and women from throughout Eastern Maine who unselfishly make a difference in the lives of others. 2 THOSE WHO CARE is sponsored by Merrill Bank and Webber Energy Fuels. For more info go to www.wlbz.com