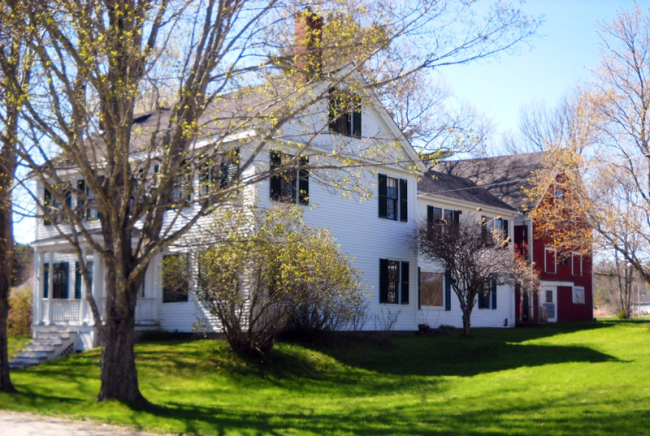 Thanks to the generosity of Phil Harriman, 88 River Road is the new home of the Cherryfield-Narraguagus Historical Society. “This house has a lot more room and we have stuff we can’t begin to display where we are now. This house is in much better condition than the Patten Building, it’s out of the flood plain, and it’s a building we can heat,” says Margery Brown, Founding Member and President of the Historical Society. “I’m delighted that Phil has given the house to the Society, so that we can continue to collect and display information pertinent to Cherryfield and I hope that it will encourage others to join us in our efforts to preserve Cherryfield history.”

Mr. Harriman is putting a new roof on the building and having a picture window installed in the kitchen overlooking the river because he’s “always wanted one in that location.” After some new wiring and plumbing and probably a new furnace are installed, the Society plans to redecorate and begin moving in, hopefully in early 2007.

Society Vice-President, Kathy Upton, says, “I’m just as pleased as punch. It’s such a positive thing for the Society and will be a great home. I think it’s good for Phil and for the Society. It puts us on firm ground, literally, and will make us more useful, more accessible, because we’ll be able to stay open year round.”

Although it is not listed in the “Guide to the Cherryfield Historic District,” the house was probably built around 1840 by William Burnham II, grandson of the Machias Burnhams of Burnham Tavern fame. Washington County Sheriff Benjamin Farrar was living there according to the 1861 Map and his second wife, Permelia, was William Burnham’s daughter. Some years later it served as the residence of Ulysses Gardner who lived in the farmhouse and ran “Gardner’s Grocery Store” downtown, in a long-gone building on Main Street right next door to the building that presently houses the Cherryfield-Narraguagus Historical Society.

Phil Harriman has been an advocate for Cherryfield all his long life. He was born on New Street in 1918 and shortly thereafter his family moved across the river to Elm Street. His father, John Harriman, ran a “1st Class clothing store in the best building on Main Street” that stood next to what is now Richard Kapral’s art studio. “It really was the best building,” says Margery Brown. “It was a nice, big, square building.” Joanne Willey remembers taking dancing lessons on the third floor of the Harriman Building; “A dancing instructor used to come down from Bangor to teach ballroom and tap dancing.” That building was later compromised by flood and finished off by fire.

After graduating from Cherryfield Academy, Phil went off to college and his work took him out of town for some time. In 1948, he bought the property at 88 River Road and for the next decade ran it as a sportsman’s lodge called the “Narraguagus River Inn.” “That was when the river was famous for salmon,” he says. During this time, he actually lived in Boston and later Portland, working as an engineer for the telephone company. He used his Aeronca TriPacer three-passenger airplane to “commute” to Cherryfield every few weeks during good weather and maintained an airstrip between the Elementary School and the pond on River Road behind the house.

In the early 60s he moved back to town and ran Cherryfield Motors for the next sixteen years. He kept his airplane for pleasure and would “fly down the river and over the islands, then back through Harrington and up to Deblois.” “All the school children used to look out the window and watch him land,” Kathy Upton recalls. “It was a lot more exciting than lessons. Then the school put up the backstop and that put an end to that.” Listen to Kathy tell about it in her own words:

When “the river went to hell, the fish stopped coming in and the fisherman stopped coming,” so Phil closed the inn and used the house as his own residence. “The government is spending a lot of money trying to find out what happened to the salmon,” he says, and Phil has been helping them for the past several decades. He has been an outspoken advocate for community involvement in salmon conservation and restoration as a founding member of the Maine Atlantic Salmon Federation and a Founding Member and long-time officer of the Narraguagus Salmon Association. He also produced a video about salmon fishing that is in the Historical Society archives.

In 1974, he inspired and was a Founding Member of the Cherryfield-Narraguagus Historical Society. In April 1977, he published Mills of the Narraguagus, a well-researched study of what was “In the late 1800’s, one of the largest concentrations of water-power-driven mills in the State of Maine…” turning twelve to fifteen million feet of timber into lumber annually. “The primary purpose of this article,” he wrote in the foreword, “is to create interest among the residents of Cherryfield and vicinity in the history of the town of Cherryfield and the Narraguagus River. It is hoped that some persons might be interested enough to assist in compiling other histories of the area, possibly on such subjects as shipbuilding, businessmen of the 1800’s and early 1900’s, the old houses of Cherryfield, the blueberry industry, and a complete history of the town dating back to the late 1700’s. It is also hoped that this article might stimulate more interest in and more support for the Cherryfield-Narraguagus Historical Society….”

After his parents died, Phil moved into their house next door leaving the house at 88 River Road vacant for the past twenty-some years. Now the house will have a new and useful life as the home of the Cherryfield-Narraguagus Historical Society. Secretary-Treasurer Joanne Willey says, “I’m just thrilled to pieces about it. First of all we need a new place and this will allow us to have more displays.”

One of the new displays will be Phil’s sister Helen Holland’s collection of teddy bears. “She had hoped to someday have a museum in Vermont with these,” he says, but when Helen died a year and a half ago and left that dream unrealized, Phil asked Maine State Police Officer Barry Curtis of Cherryfield to go to Vermont and collect many of the bears for the police to use in their work with children who come into their care through accidents, etc. The rest of the collection will be displayed in various vignettes throughout the new museum. “I was acquainted with his sister Helen,” says Joanne, “and we anticipate displaying the teddy bears as a tribute to her.”

Phil Harriman is not a man who leaves dream-fulfillment to chance. He is a hands-on sort of person and the man who is making the Cherryfield-Narraguagus Historical Society’s dreams come true.