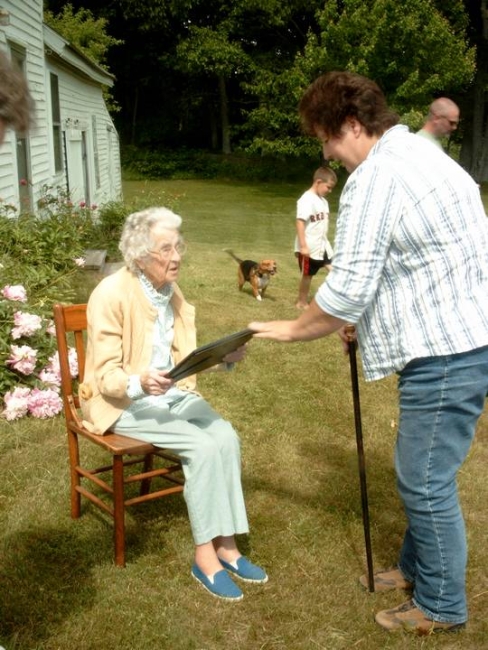 Eunice Grant was an only child, born in Cherryfield on January 5, 1912. The family lived on the Stillwater Road and her father “worked in the woods and in the sawmills.” She attended Cherryfield Academy and still goes to Alumni Association meetings. After graduating in 1929, she attended four summers (equal to one year) of “normal school in Machias,” what is now the University of Maine at Machias. This qualified her to be a teacher and she taught in one-room schoolhouses for two years, one year in Columbia and one year in Deblois, before marrying Martin Andrew Grant on June 28, 1933, and beginning a family.

They shared many happy memories of growing up on the old homestead and great love and admiration for the family matriarch. They recalled the great vegetable and flower gardens that Mrs. Grant maintained until 2004 when ill health made it necessary for her to give up her independence and move back to Cherryfield where she lives with her daughter Polly.

Now she keeps busy with reading, crossword puzzles, crocheting, knitting, and braiding rugs. She’s recently taken up Sudoku – that number game that is all the rage and routinely defeats much younger puzzlers, including yours truly. When I told her she was “as bright as a button,” she responded, “Yes, but I don’t know why.” Her family attributes her clear head, general good health, and longevity to keeping active and she exudes a gentle spirit of kindliness and interest in others.

Mrs. Grant’s mother, Hittie Tracey Harrington, held Cherryfield’s Boston Post Cane in 1985 and the family agrees that Eunice has the same determination as her mother. Right now she is recovering from hip surgery and determined to fly to Michigan next May for a family wedding.