150th Anniversary of the Epping Baseline

In honor of the 150th anniversary of the completion of the Epping Baseline, Nancy Willey, “the Baseline Lady,” will conduct two bus tours on Sunday, August 12, 2007, at 10:00 a.m. and 2:00 p.m. The tours will begin at the Cherryfield Academy on Main Street in Cherryfield and will commence with a brief history lesson to help those on the tour appreciate more fully the significance of what they will be seeing up on the barrens. She will also discuss the geology of the area through which the tour will pass, so that her “students” will recognize such glacial effects as a kame, a kettle hole, and an erratic when they see them.

Nancy Willey has earned her nickname by initiating students of all ages into Baseline history and lore. “It’s been a passion of mine for twenty-eight years,” she says. It all started in 1979 when, as the 8th grade history teacher at Milbridge School, she was instructed to come up with a project within her own discipline that would familiarize her students with the metric system. She decided to have the children measure the baseline in meters, thus teaching them something about the metric system and local history at the same time.

A report in the local newspaper states, “By 8:30 a.m. the class arrived at the site of the east monument of the base line at Epping. Dragging a piece of lobster pot warp which was 50 meters long, the students marched and measured for more than three hours, arriving at the west monument in time for lunch…After eating lunch…the class hiked out to Rte. 193 in Deblois where a school bus driven by school custodian Paul Bradbury was waiting for them….”

Willey recalls that first excursion with laughter. “The bridges were out. The road wasn’t kept up. The kids had to wade through the brooks and alder swamps.”

The students in Willey’s eighth grade class that year were Dawn Beal, Leland Beal, Donnie Bradbury, Lynn Cochran, Sean Cousins, Melanie Crabtree, Scott Hill, Heidi Huckins, John Kinghorn, Barry Lumley, Brent Lumley, Bruce Lumley, Larry Martin, Mike Perrone, Joel Perry, Lynn Reynolds, Richard Rossi, Kelly Strout, April Tucker, and Timmy Tucker. They all survived the ordeal and contributed to the “Baseline Anthology,” which was the follow-up assignment. Some have gone on to distinguish themselves locally. Perhaps the class that started it all will have a reunion and take the tour again on August 12.

An Abbreviated History of the Epping Baseline

Drawing on a number of sources, but most particularly an article written by Andrew Kekacs in 1991, which was based on “a thick stack of documents” compiled by Harold E. Nelson of Newport, “who has studied the coastal survey for more than a decade,” Willey has pieced together quite a thorough history of the baseline, which we will outline briefly.

In the early 1800s, our new nation was busy discovering and defining itself. The Louisiana Purchase in 1803 doubled the size of the United States and the Lewis and Clark Expedition set off to explore and map the west. Meanwhile, all along the eastern seaboard, shipping had increased dramatically since the American Revolution and trade was flourishing, but the accuracy of existing nautical charts was poor.

In 1807 Congress authorized the U.S. Coast Survey to map the Atlantic seaboard from Maine to Louisiana to aid in both navigation and national defense. To determine exactly how this could best be done, Albert Gallatin, Secretary of the Treasury under Thomas Jefferson, asked leading scientists for proposals, and the successful proposal came from a Swiss immigrant, Ferdinand Rudolph Hassler. He “proposed a survey based on a chain of triangles stretching from mountaintop to mountaintop down the Appalachians” and he became the 1st Superintendent of the U.S. Coast Survey.

Known as the Eastern Oblique Arc, the chain would serve as the framework for linking individual harbor surveys. It was an ambitious proposal, a major scientific undertaking at a time when geodetic surveying was in its infancy. However, according to Nelson, “in the 1800s, the United States was at the leading edge of this technology.”

Six lines, measured with extreme accuracy, were built to facilitate Hassler’s plan. They were in southwest Alabama, northwest Georgia, the Chesapeake Bay area, off Long Island, NY, in Massachusetts, and Downeast Maine. It was most common for baseline sites to be selected on open coastal beaches, because a line of about eight miles was needed, along with visibility at the ends to mountaintops. The rugged coast of Maine made it necessary to site the last baseline well inland and that has proved to be its salvation, for whereas the Epping Baseline Road is extant, no remnants remain of the other five baselines.

Once a baseline was constructed it became the one “known” side of a triangle. The principle of triangulation used in surveying over great distances is, “that if one side of a triangle is of known length and at least two of the three angles in the triangle have been determined, a length for the remaining two sides can be calculated. The three now known sides may then each become the only known side for other triangles, and the system expands.” (Nelson)

Kekacs writes, “Any error in measuring the six lines would be compounded by the mathematical calculations used to create the Eastern Oblique Arc. Such errors ultimately would reduce the accuracy of the coastal survey.” (His article in 1991 was occasioned by the GPS measuring project, spearheaded by Harold E. Nelson, that found the Epping Baseline to be accurate to within a centimeter – less than one-half inch.)

The site for the last of the baselines, the Eppling Plains from Columbia to Deblois, ME, was chosen in 1853, preliminary surveys were made in 1854 – 1856 and towers for heliotropes constructed. In May, 1857, local farmers and lumbermen were hired to grade a 12-foot-wide path along the proposed line. Where necessary, the path was cut into banks or raised by stone cribbing so that the incline or decline never exceeded one foot in six meters. 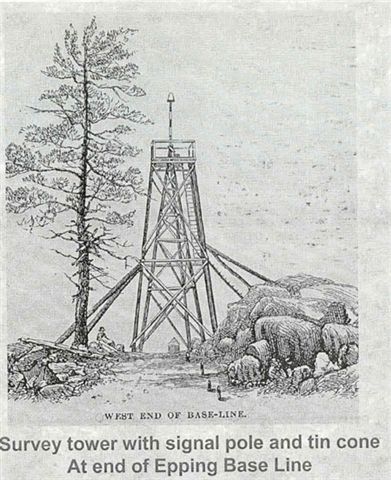 On July 15, 1857, Benjamin Franklin’s great-grandson, Alexander Dallas Bache, 2nd Superintendent of the U.S. Coast Survey, arrived to oversee the measurement of the baseline. Jefferson Davis, then Secretary of War and later President of the Confederacy, visited the survey party while they were camped on the barrens. In his memoirs, his wife Varina writes, “On a plateau near the top were white tents pitched, one for each of us, an excellent cook, tenderloin steaks from Bangor, vegetables from the neighboring farms and to all this comfort was added the newest books, and an exquisite and very large musical box which played “Ah, che la morte,” and many other gems of the then new operas of Verdi.”

According to the daily recordings in the Journal of Measurement – Epping Base 1857, bad weather slowed the survey crew until July 27, when conditions improved making it possible to finish the measurements and comparisons on August 7, 1857.

The U.S. Coast Survey, now known as the National Oceanic and Atmospheric Administration, marks its 200th birthday this year with a special website: www.celebrating200years.noaa.gov. They honor both Hassler & Bache among their Top Ten History Makers.

The Baseline Lady has lost count of the number of tours she has led over the 5.4 mile long Epping Baseline Road through the years, but she has helped literally hundreds of school children appreciate the uniqueness of their region. In September 2004, she led a group from the Senior College across the barrens. “Wow!” wrote Joan Stevens of Addison. “That’s the best word to describe our adventure yesterday on the Baseline Road. Everybody had a great time and we learned so much. You made the history and the people come alive for us. It was a beautiful day to be up on the barrens and for us to see the “purple mountains majesty above the fruited plains.”

This was probably the last group to see the southwesterly marker in its original setting, for in October 2004, the Maine State Museum removed the marble monument to its facilities in Augusta. Even though it was in an obscure setting, it had become the target of vandalism over the years and showed damage from target practice and other abuse. Despite that, one could still clearly read the carved lettering “U.S. Coast Survey,” “A.D. Bache Sup’t,” “Base No. 9,” and “1857” and fortunately, most of the road itself is still intact, stretching the eye and the imagination to the horizon. The Cherryfield-Narraguagus Historical Society is home to what is left of the eastern marker.

Support for these tours is being provided by S.A.D. 37, Worchester Wreath, Fickett Properties, Cherryfield Foods, and Jasper Wyman & Sons. Charlie Corliss has volunteered to drive the bus. Donations from the tours on August 12 will benefit the Cherryfield Academy Restoration Fund. For more information and to make reservations call Nancy Willey at 546-2259 or Polly Craft at 546-9748.