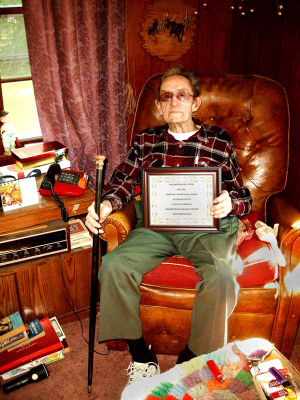 “I would tell them how I’ve had a good life,” Bud Randall offered on his 95th birthday last Monday when he was presented with Cherryfield’s Boston Post Cane honoring him as Cherryfield’s most senior citizen. The gold and ebony Boston Post Cane has been presented to the oldest citizen in the town since the tradition began in 1909 and was most recently held by the late Eunice Harrington Grant.

Leslie “Bud” Randall was born “up on the ridge” in Cherryfield on September 22, 1913. When he was four years old, his father swapped houses with Bion Willey and moved his family to Wilson Hill Road. Randall “went to the old school across the brook” and has been a Cherryfield resident all his long life. He has two children, four grandchildren, and has lost count of the great-grands and great-great-grands. He has been married three times. “They’ve all passed away. We had a good life. They were good to me and I was good to them.”

“I’m not crippled up. I’m getting along all right. It’s lonesome though, I’ll tell you that. I have a dog for company.” Randall is very grateful for relative good health. Although he has some diet restrictions, his eyesight is good and he’s “thankful for that” because he loves to read westerns to pass the time. He almost never watches television any more. He doesn’t wear a hearing aid and he still drives an automobile. His red pick-up was stolen and right now he’s driving a PT Cruiser provided by the insurance company. “I think I’ll get a Buick,” he muses. “I like a cigar and I smoke a pipe. I don’t inhale, so I guess it don’t hurt me any.”

For a man of 95, he keeps active. He rides his exercise bike every day and still mows his large lawn and that of a neighbor with a riding mower. “I used to love to dance. I’d love to go to one right now. I can dance just as good as I ever could. Do you know where they’re having them now?”

“I always hunted deer. Some submarine sailors used to come up from Connecticut and hunt with me and I’d go to Newfoundland for moose and caribou.” A large, mounted caribou head and a rack of moose antlers are hung on the living room wall, mute testimony to the success of these excursions. “Sometimes I’d go with Walter Tucker or Charles Cirone.”

He has fond memories of working as Deputy Sheriff for Washington County and 33 years for Wyman in the blueberry business. The only advice he has to offer is “you’ve got to get along with people.”